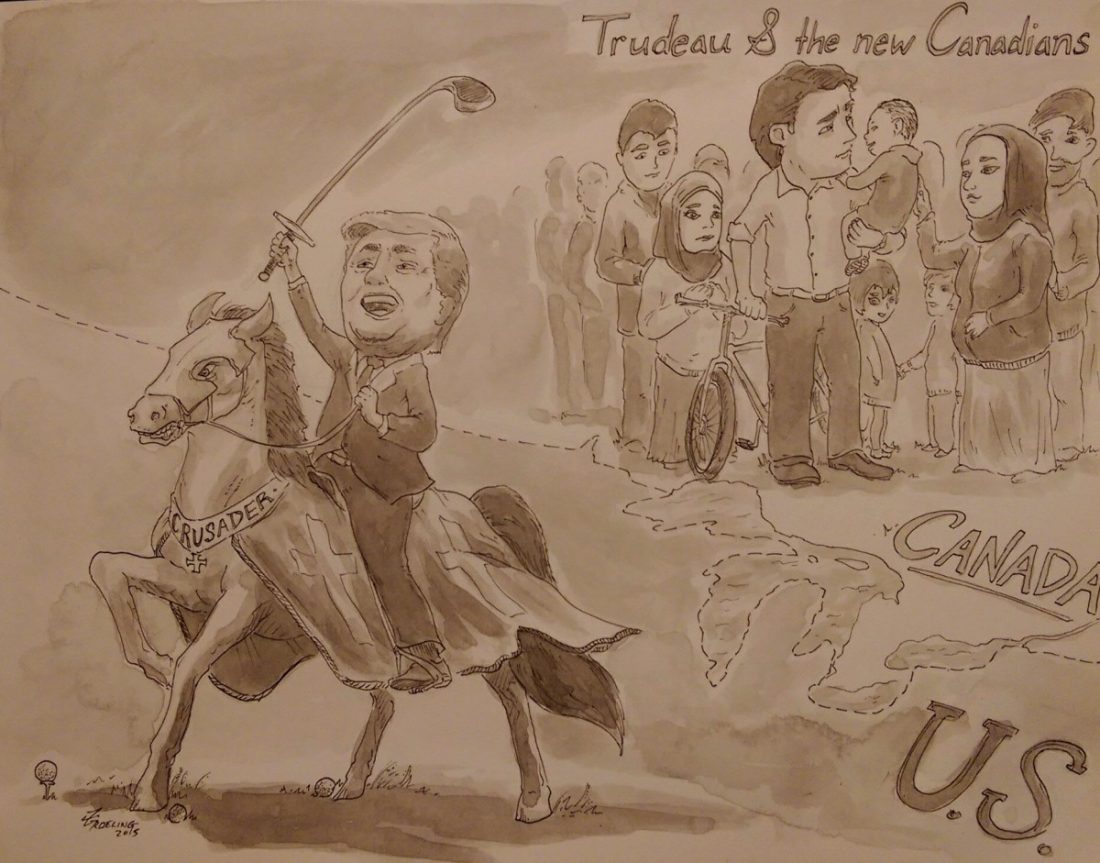 Chancellor Angela Merkel and the whole nation are welcoming the Syrian refugees with open arms and tens of thousands of retired teachers offering to teach them German language. The idea of the Fourth Reich lies buried under the weight of German humanity. But across the pond it may not be so.

It is an Indian summer day on the US-Canada border.  A day of momentary celebration when the temperature has risen to the 70s – a rare treat in the dead of winter.  On the Canadian side, their ever popular young Prime Minister Justin Trudeau has taken out his bike to join the new denizens of Canada, whom he himself, a week ago, welcomed at the airport on their arrival – the children and the families of mostly Moslem Syrian refugees, who have been braving the cold winter in the open tents along Syrian/Turkish borders. Their children, suffering from long exposure to cold are getting treated and are living in heated quarters for the first time in months.

On the US side, a few miles away, Donald Trump is riding his newly bought Arabian white horse he fondly named Crusader, to a meeting with his advisors. The main point on their agenda is how to continue to keep the Syrian refugees out of America. One of his advisors hailing from Michigan has Syrian ancestry like tens of thousands of Americans of Arab descent going back generations. He is a Christian.

The perplexing problem for Donald and his advisors is that these people fleeing the civil war in Syria are fair skinned, even blue-eyed and blond, and though the majority are Moslems, there are some Christians also, who were converted by a guy born in their area named Jesus Christ. That was a time when most in Donald’s ancestral home – pagans – ruled Europe.

History is a tiresome boring thing for Donald. He gets tired of having to deal with complex facts of that region (of any region for that matter). Such as The President of Syria is from a fringe branch of Moslems, yet his army loyal to him is Sunni like the majority of Syrians. His pals, the oil dolers of Arabia, do not even consider Assad a Moslem. The ISIL is beheading fellow Sunnis they do not like.

All this is too much for Donald and his advisors as he descends from Crusader and walks into the meeting. Everyone gets up and greet in unison. “Good Morning, Mr. President.” The greeting reflects Donald’s desire to be addressed as Mr. President, even though there is no nomination and no elections.

He nods to Flukie, his Chief Advisor.

“Mr. President, we have pondered over the problem. There are two historical precedents: the Spanish inquisition where Moslem and Jews were given a choice, either convert to Christianity or get out of Europe; or we follow the Nazis. But both options are logical, even though the most extreme right elements in the US would not agree to that. We are a kinder and gentler lot. The best solution would be that we bomb the entire area. We eliminate the Moslems at the source. That will take care of the potential terrorists once for all.”

Donald looks in the mirror, admiring the latest work of his hair stylist.

“I was reading the speeches of the great Barry Goldwater and his saying that extremism in defense of liberty is no vice. He was talking of perhaps nuking Viet Nam. But now we do not have to do that because the Moslem area is already mostly desert.

The liberal softies will make the argument that wise men who gave a constitution to this great country had kept religion out of the constitution and made it a private affair. What made America great was this main ingredient…” . (Donald interrupts) let’s not get into that……. We can always amend the constitution to defend our beloved country

Let’s get on with business, You were saying?

“I was saying let’s bomb the whole area. This is our chance to destroy our real and potential enemies. We bomb Syria now and if Iran intervenes to support Syria, as it will, we have the opening we have hungered for so long. Massively retaliate and bomb Iran, Iraq and Syria to the Stone Age. Then we bomb the fountainhead of Sunni inspiration, Saudi Arabia, and secure their oil fields. And of course, Pakistan, which has stolen our nuclear secrets. We send our Navy Seals to defang their nuclear assets. It’s a piece of cake, Mr. President. No one not even the Russians have the power to respond.”

Donald: Iraq? What do you mean? They are our allies!! We have pumped in more than a trillion dollars. I know most of it is unaccounted for, but Iraq???

Flukie shakes his head. “Mr. President, let me explain. We chose the wrong side. The rulers of Iraq are Shiites like the rulers of Iran and we actually helped Iraq to come closer to Iran. Likewise, we made another error in Syria. We are arming those who are beholden to Al Qaida. It is a mess there. The only option we have is to destroy everything completely and start all over again. Just as we did in Japan and Germany during World War 2. Germany and Japan are now our biggest and strongest allies. Then those Arabs would not mess around with the US anymore, and we can streamline oil supplies and sell them military material. It will be a win-win situation for us as we help them reconstruct their countries. And I am not an economist, but our people do need jobs and this would create tens of thousands of jobs here in the US, as we hire people to help rebuild these countries from scratch.

This will also take care of some misgivings of the unemployed masses in middle America, who saw whole factories uprooted and shipped to China and made many factory owners join your club of billionaires. That is the least we can do for the poor people of our country.

Right now polls show that fellow Americans do not want war. But we can whip up mass hysteria against those half-assed Arab potentates. Our estimates are that with carpet-bombing we will kill less than those in Japan and Germany in the Second World War. We have to be brave and courageous, as some of those we wipe out will be fellow Christians. But that will be acceptable as the majority will be Moslems.”

George X, the Christian, who is of Syrian descent. “This is the craziest scenario I have ever heard….” Who asked you, snaps Donald. You stick to taking care of my money. We will consider all options to defend America!

Flukie goes on, “Mr. President, coming back to our own country, we can then force the Moslems settled here to go to those countries to help rebuild and stay there. There are also some – Irish and white Moslem Americans – scientists, doctors teachers, etc., whom we can offer the choice: come back to the religion of their forefathers or face expulsion – relocation would be a better world to those areas.

Fascinating! Let me test the notion at the rally in that town we are going to near Detroit. With factories gone almost everyone is unemployed. Maybe this is what they are waiting to hear.

Flukie: “And Mr. President your ratings would skyrocket.”

I know that, you don’t have to tell me! Trump snaps as he climbs Crusader and goes off to play golf, while thinking of sending an envoy next door to arrange a meeting with Trudeau, and telling him how dangerous it is to comingle with these dubious Moslems of Syrian descent.