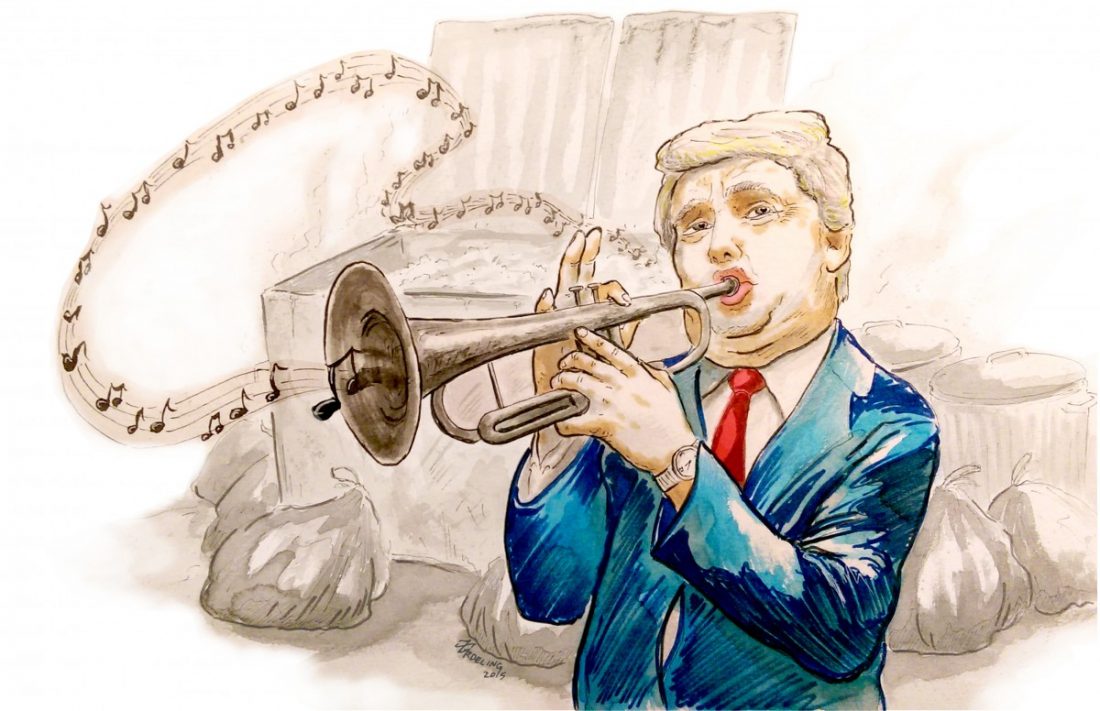 Tell me how the f—k did you manage to do that? huh?

Trump was berating one of his sidekicks for soiling his bow tie with marinara sauce just seconds before they were to go out and meet the New York crowd.

Ever since Donald has become the front-runner, his handlers have been trying to find a way of giving him a common touch by letting him mingle with the New York crowd. The venue mutually agreed by the local community board and Trump’s team was a popular Stardust in Soho.

He will have a question and answer session over coffee with the citizens of New York. 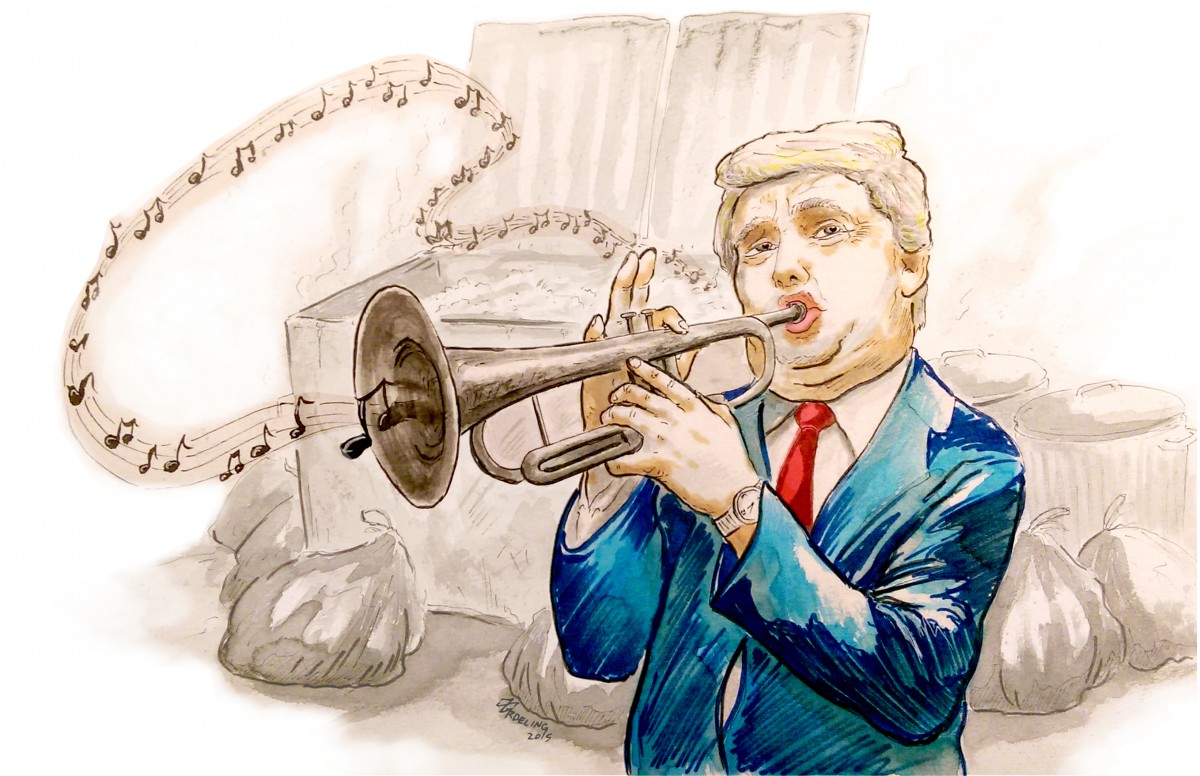 cartoon by James G. for Ishrat

Sir, you may remember me. I still own a small used bookstore on 4th avenue……….

………..Yes, I know and my attorneys will get you out of there. You cannot stand between progress – the high-rise buildings for long. …Anyways what is your question?

Sir, your views on climate change.

DT: Well that is not really a bad thing. I was in New York this summer. I was surprised. We had heavy rains intermittently all day and night. Very tropical. Pretty soon we will be able to plant banana trees on Bleecker Street. We will then be able to cut down on imports of bananas and fruits from South America. And that is not the only thing we will be able to stop from coming across the border. Would not that be a good thing for all of us?

You will be surprised I am for family planning and abortions. It is perhaps the only way to stop the demographic change in New York.

Sir, my parents came from India……….”doctors?” …Yes. As I was saying how can we deal with nuclear-armed Pakistan, which is a threat for India.

I think India should attack Pakistan with a surgical strike…………………. But sir they have nuclear weapons. Never mind, with the Yankee ingenuity, we will develop ways to control radiation. We can do anything. We will give India the technology to control it.

We are going to change the symbiotic relationship, the very D.O.T of our relationship……….

You mean the DNA

…………..Stop interrupting. You know what I mean. A few words do not change anything, as George Banks rightly said in Mary Poppins “do not muddle the issue with facts”.

No patriotic American agrees with it. I will do my best to dismantle it and the frozen Iranian assets should be given over to the Israelis, as they will put these to better use.

What about President Obama?

In history he goes down as the first President with a foreign sounding name and a Moslem father who was not even born here. Even Chief Justice John Roberts hesitated as he fumbled when swearing him.

He got elected because some misguided and self-hating young bright Internet savvy American kids got on his election team.

These days you can photo shop and print any thing. My team has made a photograph of George Washington munching a Big Mac. We all know there were no big Macs around then, but if you look at the PS photo, it looks so real, it is unbelievable. This just goes to prove the point of millions of patriotic Americans about current White House resident who was not even born here.

Sir what do think of Edward Said, the late New York intellectual?

Who? Can you spell his name? It is so confusing. That is why we so not know where we are going. Just think how do you mix Edward with funny sounding last name. Edward is majestic name fit for kings. I am just disgusted.

Why do you always bring up Israel? It is the only friend we have out there. They understand the American way and have no objection if we ate non-kosher food in their capital.

What about our relation with Russia?

What about it? If Putin stands next to me you cannot see any difference. He will look exactly from the tribe of our founding fathers. He and I can sit and resolve anything just looking into each other’s eyes.

Well we have a good trade relationship with them. They make a good pair of sneakers for $5 and we sell them here for $110. I wear one of them. As long as we have a robust free trade on the sound principles we should engage them, but we must be careful.

What about the Moslems in America?

We first reconciled and elected a Catholic president, and then we embraced the Jews. President Johnson even went so far and gave blacks the rights that directly infringed on our manifest destiny. Why should we just give, give and give? Enough is enough.

So you mean to say the minorities are not Americans?

I did not say that. We white Americans have built this country as a great … the most powerful nation in the world. We have the right to steer it to further greatness.

How about having women as a running mate?

Well first they should know how to conduct themselves. I salute Hugh Hefner for banning nude women from the pages of Playboy magazine. That will go a long way in putting back our women in their rightful place.

President of the Community Board:

Thank you for taking time out to talk to us Mr. Trump. You will be pleased to know that this is the first time in its history that all the members of the community board agreed unanimously on any one thing – that is to give you a small present just for coming. (As he presented Donald a copy of the Jerzy Kosinski novel and a DVD of the Peter Seller’s movie, “Being There”). I may add a personal note: Sir, this is the first time in the 70 years of my life that I have really seen life imitating art.